May 29, 2020
Trending
Home News Reporters' Notebook: The Moment Everything Changed In Syria – NPR

Mohammed Sheikho and his family fled heavy fighting in their town of Tel Abyad, Syria, and had been on the run for three days trying to reach safety in Iraq, when NPR encountered them in northeastern Syria on Sunday.

Our small NPR reporting team arrived in Syria just in time to witness a historic moment in the long-running civil war. But we didn’t think we would have to rush out so quickly.

It was Sunday. Only a week before, President Trump had ordered some U.S. troops to exit parts of northeast Syria, making way for Turkey to launch an offensive against Syrian Kurdish forces controlling the area. The day we arrived, the Kurdish forces invited the Syrian government to retake the territory and fend off the Turkish invasion.

As the Syrian government military advanced, we found ourselves among other journalists and aid workers scrambling to escape, fearing arrest by the regime — and leaving behind the Syrians we had met who had no easy way out.

Entering Syria took hours. At the border crossing in Faysh Khabur, northwestern Iraq, we processed paperwork with Iraqi Kurdish officials and sipped Qazwan coffee, a Kurdish hot drink with notes of pistachio, with the border manager we liked to call the Big Responsible, as he was nicknamed in Arabic. Then we shuttled across a rickety bridge over the Tigris river into northeastern Syria.

We soon saw a local journalist in tears. Her Kurdish fighter friend had just been killed in battle. 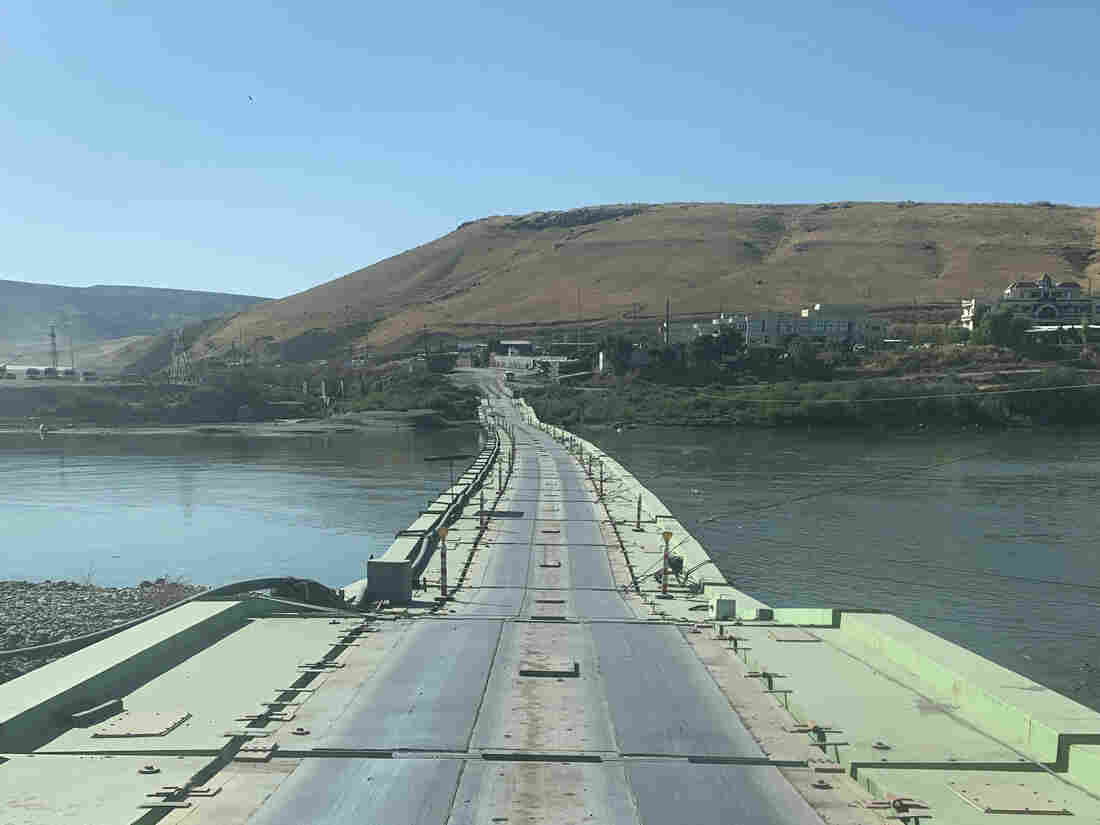 Crossing the bridge over the Tigris river into Syria from Iraqi Kurdistan.

Our driver Hamoudi picked us up in a large white van with a license plate with Kurdish, Assyrian and Arabic written in red, a mark of the diversity of this corner of Syria. (He doesn’t want his full name used to avoid trouble if the Syrian regime takes over his area and discovers that he worked with journalists.) His stuffed gorilla named Zizo rode on the dashboard. Zizo has accompanied Hamoudi for five years, witnessing the rise and fall of ISIS in this part of Syria, and he would join us in this latest chapter of the war in Syria.

We drove past oil rigs and cows grazing in yellowed fields. Pickup trucks sat roadside, packed with stacks of colorful mattresses, bags of eggplants and tomatoes, and young women who look much older than their age. We pulled over.

A 70-year-old man with a weathered face, Mohammed Sheikho, was with his siblings and their families. They had fled heavy fighting in their town of Tel Abyad, Syria, and had been on the run for three days, sleeping in the desert, trying to reach safety in Iraq. They had not be able to cross the border for lack of the right documents.

He was thinking of those he left behind. “My sons are stuck in Kobani,” a Syrian city under Turkish bombardment with roads cut off, “they are surrounded,” Sheikho said, and wiped away his tears with the scarf on his head. He then drove off to find a place to sleep for the night.

It is horrible to see a grandfather cry. It wouldn’t be the last time we witnessed that on our trip. 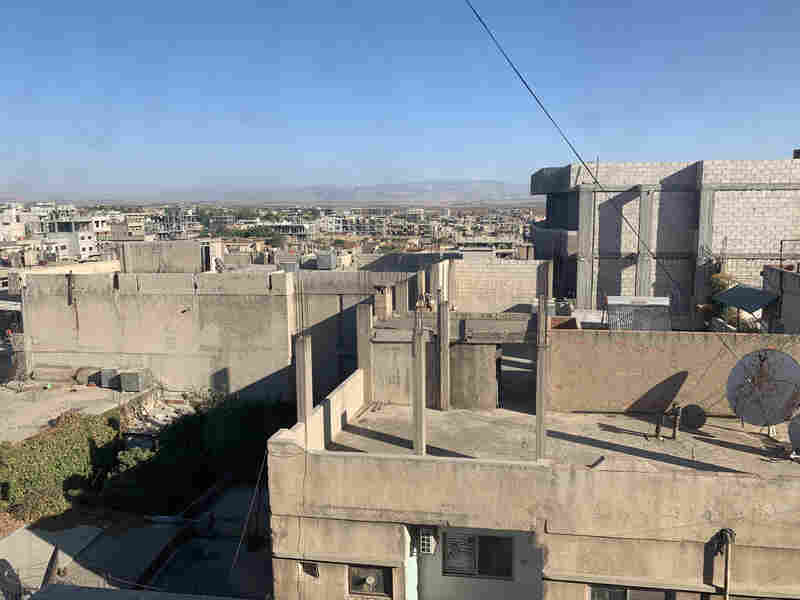 The Syrian town of Derik is about a half-hour drive from the Iraqi border and a few hours’ drive away from where Turkish-backed troops are pummeling Syrian Kurdish forces, as U.S. troops slowly withdraw.

We reached the Syrian town of Derik, about a half-hour drive from the Iraqi border and a few hours from areas where Turkish-backed troops were pummeling Syrian Kurdish forces, as U.S. troops quickly withdraw. Derik is considered an upper-middle class town. The town is known for its homegrown musicians, according to Sangar Khaleel, a Kurdish journalist who was our guide. They are throaty singers with the “voice of the mountains,” he said. No one was singing that night.

Before sunset, we took a drive around town. Wedding halls and some restaurants were closed as battles raged nearby. Some Kurdish officers were building scaffolding in the road. A man in fatigues said they were making a canopy to keep troop movements hidden from Turkish drones, anticipating the fight coming to their town. We wondered how this contraption would protect them from a forceful opponent. 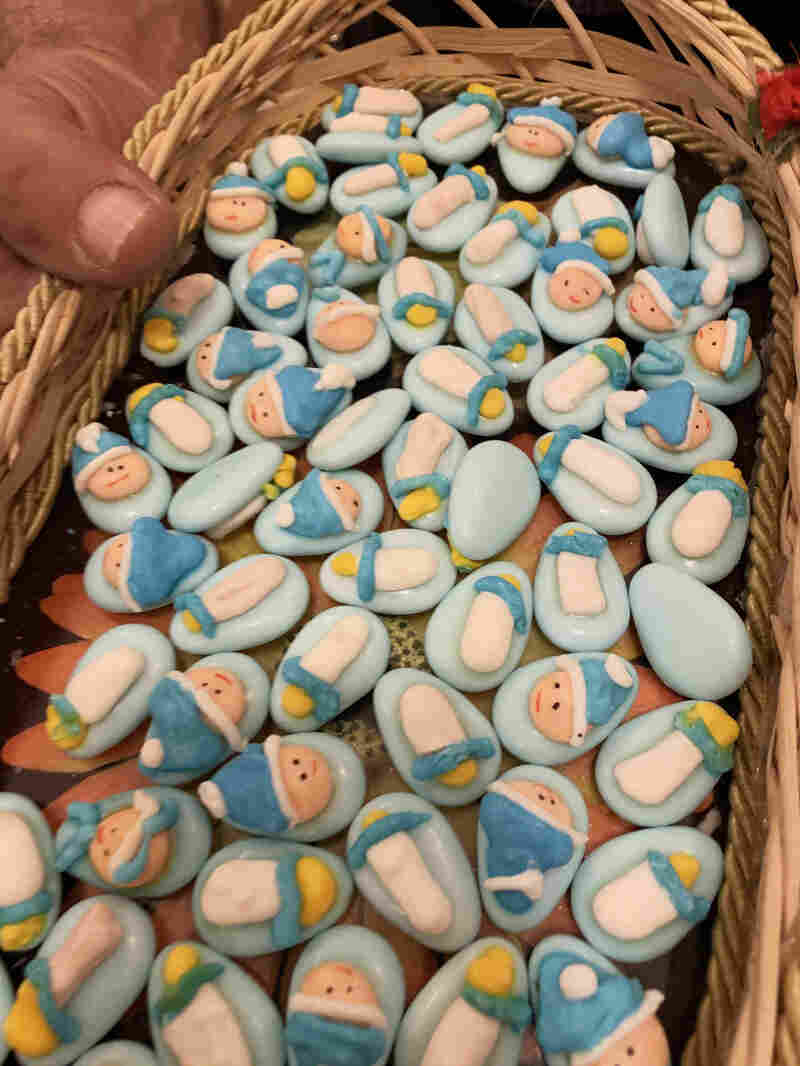 Other aspects of life continued. Clothing stores were open. Kids played soccer in the street. A pair of women ate sunflower seeds on their front stoop.

We spotted a church and wound up crashing a baptism. Baby Hanna, just a few months old, cried while women trilled in celebration. Clergymen in gowns with golden embroidery dunked him in a marble basin of holy water. They chanted prayers in ancient Aramaic. A relative offered us tiny blue candies decorated with baby figurines. It was Sunday, and the priest said he urged his worried congregation to lean on their faith for comfort. Turkish shelling had hit nearby villages the night before.

All this chaos began after the White House’s Oct. 6 announcement that NATO-member Turkey was ready to launch an offensive into northern Syria and some U.S. military personnel would stand aside. The U.S. troops were stationed there in support of Syrian Kurdish forces in the fight against ISIS and the U.S. presence was a buffer against Turkey. The Turkish government considers the Kurdish forces as part of an insurgency threatening its national security.

The day we entered the country, as Turkey’s offensive intensified, President Trump said the U.S. would pulling all its troops out of northeast Syria.

Trump came to protect us. But the day someone came to hit us, he pulled out.

“Trump came to protect us. But the day someone came to hit us, he pulled out,” said the baby’s grandfather, Mikhael Yousef Issa. “It’s betrayal for the whole area, not just for Christians. What affects you, affects me. The bullets are falling upon us all.”

The 65-year-old with a white mustache gave us cake and Coca Cola and invited us to stay at his house, even “for one year.” This hospitality is not unusual. Thousands of Syrians who have fled the fighting are sleeping at relatives’ homes away from the front lines.

We stopped at a tobacco shop. The owner had a faded tattoo of a girl’s face and the word “love” in English on his forearm. He was chain-smoking with his friends and shouting at the television. The news showed stretchers and bloodied Syrian Kurds in a town about three hours away.

“We’re watching in order to know when to escape,” he said. Then he asked us: You’re journalists, you tell me, when should we leave?

We wondered where he could even go. The Iraqi border is closed to most refugees, and his town is one of the quietest in the area.

Journalists huddled around a TV at our hotel when the news broke. Alliances on the ground suddenly shifted. The Kurdish forces invited the Syrian regime to recapture the area. The Syrian military announced it would retake the entire length of the country’s border with Turkey, which we could all see from our hotel windows. 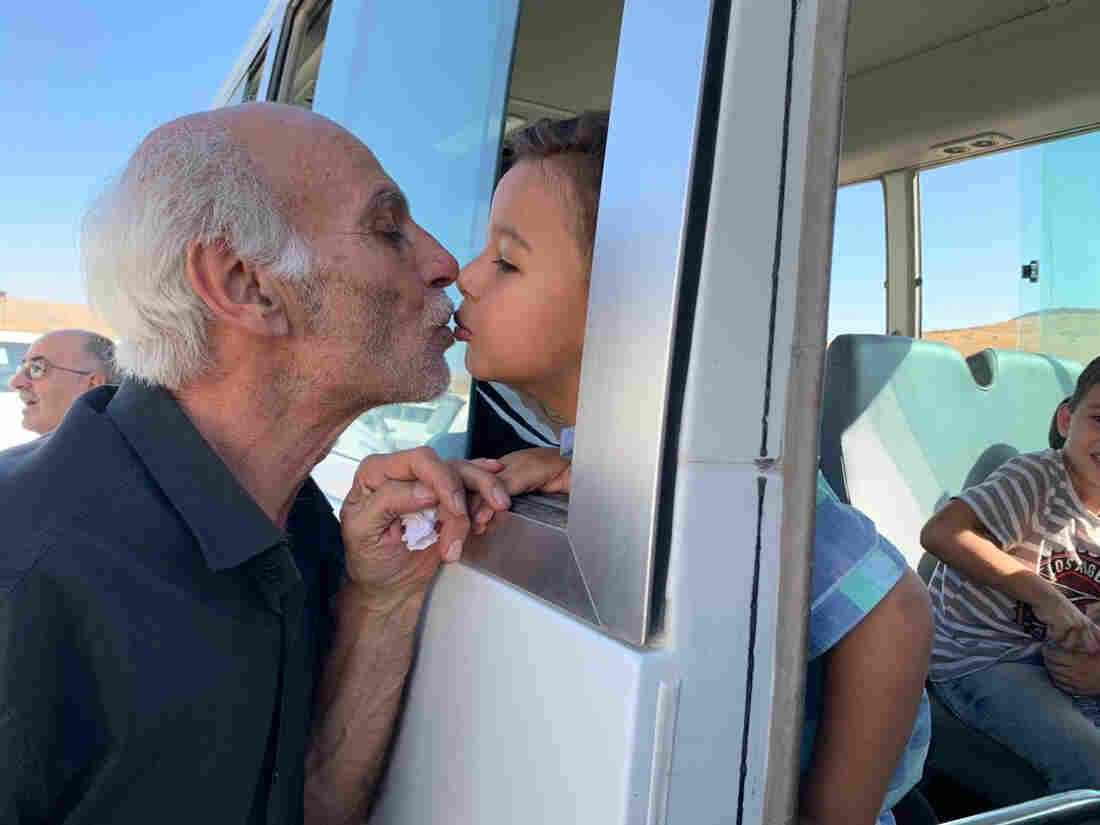 Grandfather Issam kisses his grandson Rayan goodbye before the 4-year-old left to enter Iraq. Issam did not have papers to cross. “Separation has killed the people. It’s destroyed a generation. War is without a purpose,” Issam said, crying.

We walked down the street outside our hotel and met Syrian Kurds relieved about the news.

They said they preferred President Assad, though his regime has limited the Kurds’ rights, to their bigger rivals, Turkey and its Syrian Arab mercenaries, whom Kurds said they fear will kill or expel them. But a 19-year-old barber said he was afraid of being drafted into the regime’s army and wondered if he will have to flee.

Regime forces were quickly advancing toward towns in the area, and there were rumors they would be taking over the border crossing with Iraq. We had entered Syria with permission from Kurdish authorities, not the Syrian regime. None of us wanted to end up in a Damascus prison. At 12:41 p.m., a colleague told us he heard the regime would take charge of the border at 3 p.m.

Hamoudi rushed us to the border, only slowing for a gaggle of geese crossing the road. Empty vans were driving in the opposite direction after delivering international aid workers to the border. For days, aid workers had been burning their documents in steel bins, anticipating the return of regime forces and destroying evidence of who had been in Syria.

We shared the ride to the border crossing with a Swedish radio correspondent, Cecilia Uddén, who has covered the region for years. She reminisced about the Syrians she has interviewed over the years, such as a female judge presiding over ISIS trials. “It’s awful to be leaving people behind,” she said.

At the border, a shuttle bus came to take us back over the rickety bridge to the Kurdistan region of Iraq. As we were boarding, a 4-year-old boy on the bus kissed his grandfather goodbye through the window.

Separation has killed the people. It’s destroyed a generation. War is without a purpose.

Issam, a Syrian whose relatives were fleeing to Iraq

“Grandpa, come on the bus with us. Why aren’t you coming with us?” the young boy, Rayan, asked.

His grandfather, who gave his name as Issam, didn’t have the Iraqi residency papers needed to cross.

“I’m going to miss you so much,” Rayan said. “Grandpa, we will talk on video chat every day, OK?”

His grandson got off the bus and tugged at his grandfather’s shirt. “I’ll meet you later,” Issam said.

Then Issam told us he didn’t know when he would.