“If Kim Jong Un takes that approach, we’ll be extraordinarily disappointed and we’ll express that disappointment,” O’Brien said on ABC’s “This Week” when asked whether the US would respond to a long-range test.
North Korea had previously threatened a “Christmas gift” if the US doesn’t provide concessions like sanctions relief by its self-imposed, year-end deadline. The Trump administration had widely interpreted the promise of a “Christmas gift” to mean a weapons test, especially as intelligence indicators grew. Though no such tests have been detected from North Korea since Christmas, officials have remained watchful in the days following the holiday.
American officials say they don’t believe they are out of the woods yet and are closely monitoring events on the Korean Peninsula, according to a senior administration official. 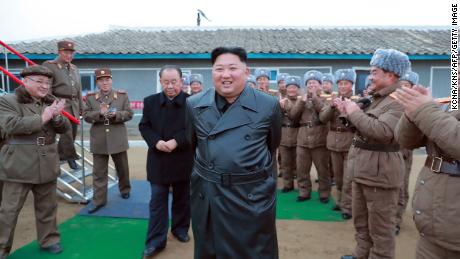 That includes monitoring a meeting of top-level ruling party officials, which North Korean state media said had convened on Saturday. The Korean Central News Agency said the plenary session was meant to address the “manifold and harsh trials and difficulties” facing the country, and would continue into another day.
It’s possible North Korea could announce changes of policy direction at the meeting, including an intention to end diplomatic efforts with the United States or restarting its missile or nuclear testing.
In the past, Kim has used the plenary sessions to announce important foreign policy shifts. He is due to deliver a speech on New Year’s Day, where any decision could be announced.
O’Brien said Sunday that the White House was monitoring the situation, which he indicated was concerning. But he declined to speculate on specific consequences for North Korea, saying only that the US has “a lot of tools in our toolkit.”
CNN previously reported that the administration has pre-approved a series of military show-of-force options that could be quickly executed if North Korea were to engage in a provocative missile launch or some type of test of weapons components, according to a US official. Those options could include everything from flights of bomber aircraft over the Korean Peninsula to quickly called military drills of ground weapons.
It is not known, however, what the threshold of North Korean action would be to generate a US response. North Korea has fired several short-range missiles in recent months without any US military response.
During his Sunday interview, O’Brien also brushed off recent comments from his predecessor, John Bolton, who recently cast President Donald Trump’s attempts at diplomacy with North Korea as a failure.
“The President and Ambassador Bolton didn’t always see eye to eye on how to conduct American diplomacy,” O’Brien said, adding that Trump doesn’t have any “illusions” about the difficulty of opening talks with Kim.
Asked whether the US and North Korea had communicated since October talks broke down with the US special envoy Stephen Biegun, O’Brien said only that “there are channels of communication.”

Several coronavirus vaccine candidates have been authorized for emergency use around the world. Most …

We independently selected these products because we love them, and we hope you do …