After ugly scenes at the city’s international airport Tuesday, where protesters beat and detained a man they accused of being an undercover police officer for several hours, the largely leaderless protest movement has been engulfed in a bout of soul searching.
Small groups of protesters gathered at the airport again Wednesday, despite a new injunction banning demonstrations there, bearing signs such as “dear tourists, we’re deeply sorry about what happened yesterday. We were desperate and we made imperfect decisions. Please accept our apology.”
A statement emailed to journalists by one group claiming to represent protesters pointed to days of peaceful demonstrations at the airport, saying the violence Tuesday was an unfortunate aberration.
“We are frightened, angry and exhausted,” the statement said. “Some of us have become easily agitated and over-reacted last night. For this we feel pained and dispirited and would like to express our most sincere apologies.” 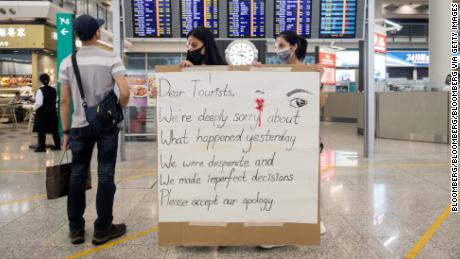 The protest movement started with largely peaceful mass demonstrations attended by hundreds of thousands of people demanding the withdrawal of a since-suspended extradition bill. As the movement’s demands have been ignored, however, violence on both sides has escalated, and distrust has grown. This reached new heights over the weekend, when police dressed as protesters were filmed taking part in arrests, and unsubstantiated accusations circulated claiming they acted as agents provocateurs carrying out the worst of the violence.
It was perhaps inevitable that the heightened paranoia would spill over into something worse, as it did at the airport on Tuesday when the crowd grabbed the 23-year-old Chinese man surnamed Xu, accusing him of being an undercover police officer.
At times the violence threatened to spiral out of control, as members of the crowd continued to lash out at the detained man even after he appeared to fall unconscious and was receiving aid from paramedics.
Another Chinese man, later confirmed to be a reporter for a Chinese state owned newspaper, was also grabbed and assaulted, before being removed from the airport by medics.
When protesters did attempt to reason with those determined to detain Xu, they were shouted down, with many reduced to tears from fear and frustration. The incident showed clearly the growing rift in the mass movement between those supportive of increasingly violent and radical action, and those who wish to keep protesting peacefully.
It also emphasized a key problem in leaderless protests: When no one is in control, whoever shouts loudest tends to get their way.

How did the airport protests turn violent?

When airport authorities announced that all departing flights had been canceled on Tuesday, for the second day in a row, there was jubilation among the thousands of protesters gathered there.
In contrast to the protesters who had gathered at the airport throughout the weekend — when it was seen as a peaceful, safe place to stage a protest away from the teargas and petrol bombs that have become a common sight in street clashes — the crowd Tuesday was younger and more radical, most wore masks and other protective gear.
They were also more paranoid and irrational, quick to anger, lashing out at each other, airport security and reporters as the situation around Xu — the detained man — grew uglier and uglier.
Xu was first accosted at around 6:45 p.m., and accused of being an undercover cop. What exactly elicited the crowd’s suspicion remains unclear — there are multiple contested accounts — but the situation quickly devolved, with protesters around the airport rushing to the scene. Some punched and kicked Xu as airport security and staff attempted to intervene.
Over the next four hours, those security guards, joined by two or three protesters and a paramedic — and aided occasionally by foreign journalists — attempted to reason with the crowd to let Xu go as his situation worsened. The area in which he was initially held was intensely hot and stuffy, and surrounded by an agitated crowd, he collapsed. A paramedic who arrived gave him oxygen but Xu drifted in and out of consciousness as his protectors negotiated with the crowd to move him to the main terminal.
And that’s where he remained — after being moved, while unconscious on a luggage trolley — for over an hour.
Some protesters who could not see him shared photos of his bruised face that had been posted online, laughing at his predicament. No hard evidence was provided for him definitely being a cop other than a Google search which came up with a police officer in Shenzhen with a name that matched the one protesters found on his personal ID.
While the consensus in the terminal was to hold him — to what end, no one was clear — the debate online was far more vigorous. Many pointed to the terrible optics of preventing paramedics evacuating the casualty, highlighting tweets from reporters in the airport as examples of how the incident was being received overseas. Others took an even more extreme stance to those on the ground, with posts suggesting suspected infiltrators should be branded in some way so they could be spotted in future.
“Hong Kong people are in a very dangerous moment, some things in front of you may look crazy but we have no choice,” Max, a 35-year-old protester, told CNN at the airport. “It’s just like war, we’re fighting for our future.”
A female protester — who did not give a name — said through tears after an attempt to free Xu was shouted down that “this is all so stupid and crazy. This is a disaster.”

Reaction to the violence

The arrival of the five police vans at around 10:45 p.m., local time, allowed for a window in which Xu could be evacuated.
One man, a 60-year-old security guard who had been by Xu’s side throughout the confrontation, attempting to prevent him being hurt further, broke down after he got on the ambulance, overcome by relief and emotion.
Protesters then clashed with police, attacking their vehicles and ramming officers with luggage trolleys. One police officer was isolated and attacked by the crowd, and drew his side arm, pointing it at the protesters before other cops reached him.
Almost immediately more chaos broke out inside when another man was accused of acting suspiciously. He eventually turned out to be a reporter for the nationalist state-run Chinese tabloid Global Times, and was assaulted and bound to a luggage trolley before paramedics managed to evacuate him as well.
In many ways, Tuesday’s violence was similar to the July 1 storming of the city’s legislative council. Then too, moderate voices attempted to intervene but were drowned out by an angry crowd, which eventually broke in and vandalized the building, spraying slogans inside the main chamber and erecting a colonial era flag.
Following that incident, which was highly publicized in Chinese state media, many in the movement worried they would lose moderates. But support proved resilient, with many pointing out there were no injuries.
Critics also perhaps underestimated the disdain with which many Hong Kongers viewed the legislature and their lack of sympathy for a symbol of the local government being attacked.
Tuesday’s incident may prove different. Despite the claims of some protesters, Xu has not been confirmed to be a member of the security forces, and even if he was, he was one man against several thousand. His treatment was greeted by shock and disgust by many online, even among supporters of the movement. For those attempting to portray the Hong Kong protesters as a baying mob of radicals, the pictures from Tuesday were a gift. 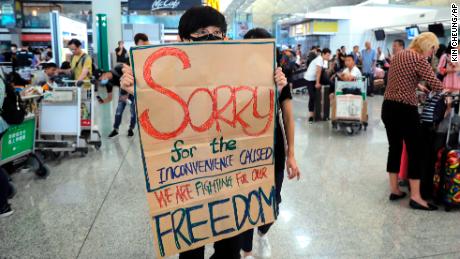 Where does it go from here?

With calm largely restored to the airport and the city in something of a lull Thursday, the protest movement is discussing how to rein its worst impulses in, while retaining the flexibility and inventiveness of its leaderless roots.
This process began before Tuesday’s out-of-control mob justice. In a widely shared letter from prison, Edward Leung, an iconic pro-independence activist who was jailed for his role in protests in 2016, urged people to reflect on how various actions helped them reach their goals.
“Of course, true justice is still hasn’t arrived, and perhaps therefore your hearts are filled with anger,” Leung wrote on July 29. “This is human nature. But I urge you not to be controlled by hatred. In a time of calamity, you must always think rationally.”
A flyer shared Wednesday on Telegram and LIHKG, an online forum popular with protesters, echoed Leung’s words in urging a thorough reflection on Tuesday’s violence.
“We must admit last night’s actions at HKIA were far too impulsive,” it said. “We have resolved to bravely face up to our own shortcomings. We sincerely apologize to the citizens who have always supported us.”
Another poster shared a proposed code of conduct for protests, including “protect and fully cooperate with emergency personnel” and “if you suspect you’ve uncovered a mole, do not just attack.”
Traditional democrat groups have also moved to regain control of the momentum, if not the movement.
Pro-democracy protests have traditionally attracted a broad cross-section of Hong Kong society. Many people have stressed that it is possible to be both supportive of the current protest movement and against the actions of a violent minority.
A key test of this support will likely come on Sunday. The Civil and Human Rights Front, which organized two mass anti-government rallies in June it claims attracted up to two million participants, has called for a march, the slogan for which is “Peaceful, Rational, and Non-Violent Protesters Stand Out.”
Whether these efforts are successful remains to be seen. Previous efforts to encourage calm have been lost in the tear gas and forceful tactics used by police, many protesters are also angry and frustrated that the government did not respond to mass peaceful rallies, and believe violence is the only way to increase the pressure.
That anger and frustration has led to a nihilistic, bitter streak among some, mostly younger protesters. That came to the fore on Tuesday, exemplified in the responses of some protesters to concern for Xu’s safety — he was lolling unconscious on a trolley at the time even as they claimed he was “faking it.”
What if he dies? “Who cares,” said one protester, who did not give a name in the chaos.
What do you think will happen if he really is a cop and he dies because you didn’t let medics save him?
“So they shutdown Hong Kong? Good! We are ready for it, we want it!”

The above piece is based on hours of on the ground reporting from Hong Kong airport, throughout the detention of Xu, and interviews with participants and onlookers.