The right-wing weekly publication Gazeta Polska said it will include the stickers, which feature an image of a black cross over a Pride flag alongside the inflammatory slogan, in its next issue.
The stunt has sparked outrage from many inside the country and was criticized by the US Ambassador to Poland.
“I am disappointed and concerned that some groups use stickers to promote hatred and intolerance,” Ambassador Georgette Mosbacher said on Twitter Thursday. “We respect freedom of speech, but we must stand together on the side of values such as diversity and tolerance.” 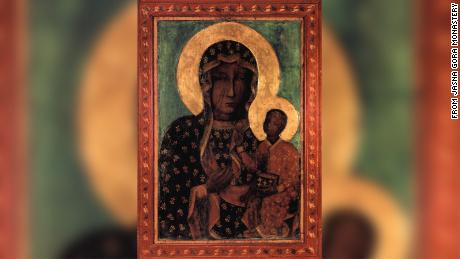 On Friday, Piotr Muller, a spokesman for the country’s ruling Law and Justice Party, known by its Polish acronym PiS, issued a rebuke to Mosbacher, saying her statement was “unnecessary.”
“It seems to me that this is not an issue related to relations between America and Poland,” the AFP news agency reported him as saying, citing Polish news agency PAP.
CNN has requested comment from PiS and from Gazeta Polska.
The magazine is heavily supportive of PiS, which has repeatedly targeted Poland’s LGBTQ community.
Gazeta Polska’s editor in chief, Tomasz Sakiewicz, told Polish TV station Republika that the stickers are in “opposition to the forceful imposition of LGBT ideology.”

‘This is a call to violence’

Press freedom groups have long warned that PiS has attempted to stifle media liberties and turn publications into its mouthpieces.
“It’s not even discrimination any more — this is a call to violence,” Hubert Sobecki, co-president of Warsaw-based LGBT+ organization Love Does Not Exclude, told CNN.
“We’ve witnessed a huge, ultra-conservative backlash since the beginning of this year, with the entire government propaganda machine targeting the LGBT community here in Poland, and scapegoating us as the public enemy,” he said. “But this is certainly something new, and seems to be crossing the line of hate speech.”
The stickers hark back to Nazi-era signage in Poland that made clear that certain public areas and institutions were not to be used by Jews, Sobecki added. 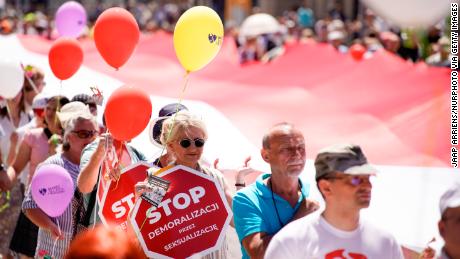 Warsaw’s deputy mayor, Pawel Rabiej, filed a complaint with the prosecutor’s office over the stunt and is attempting to have distribution of the stickers blocked.
While Polish attitudes toward homosexuality are slowly progressing, same-sex marriage is not legal and the overwhelmingly Catholic country remains one of the most conservative and restrictive in Europe for LGBTQ people.
In recent months, PiS and Polish Catholic leaders have ramped up their use of homophobic and transphobic rhetoric, with party leader Jaroslaw Kaczynski calling LGBTQ rights a “threat” to Poland.
Opinion polls suggest the group is set to gain reelection when the country goes to the polls in October.

WHO admits error in assessment of deadly coronavirus risk – The Hill

The fast-moving coronavirus has killed 130 people and infected 6,000 others in China — …