The limpet mine used on a Japanese-owned oil tanker in the Strait of Hormuz “bears a striking resemblance” to other Iranian mines, U.S. Navy officials said Wednesday.

Cmdr. Sean Kido of the U.S. Navy’s 5th Fleet claimed Wednesday that the damage done to the tanker was “not consistent with an external flying object hitting the ship.”

The remark contradicts the claim made by the ship’s owner who insisted that eyewitnesses aboard saw “flying objects” before the attack in the Gulf of Oman.

The Navy official added that investigators have recovered fingerprints and a handprint from the side of the ship after the attack.

The limpet mine used on a Japanese-owned oil tanker in the Strait of Hormuz “bears a striking resemblance” to other Iranian mines, U.S. Navy officials said.
(U.S. Navy)

The revelation follows ever-increasing tensions in the region. The Iraqi military said three rockets hit an installation north of Baghdad on Monday that was used by Iraqi troops American trainers. 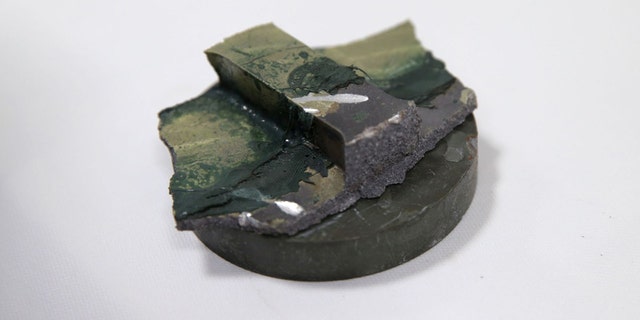 The limpet mine used on a Japanese-owned oil tanker in the Strait of Hormuz “bears a striking resemblance” to other Iranian mines, U.S. Navy officials said.
(U.S. Navy)

The U.S. claimed the Iranian regime was responsible for the “blatant assault” on two oil tankers last week, bringing the Middle East on a brink of a military conflict.

Secretary of State Mike Pompeo said Iran’s culpability was based on “intelligence, the weapons used, the level of expertise needed to execute the operation, recent similar Iranian attacks on shipping, and the fact that no proxy group operating in the area has the resources and proficiency to act with such a high degree of sophistication.” 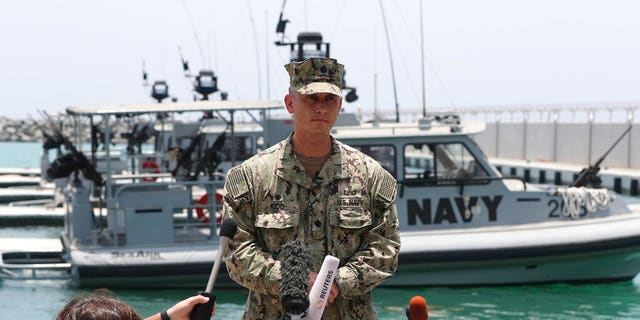 Cmdr. Sean Kido of the U.S. Navy’s 5th Fleet talks to journalists at a 5th Fleet Base near Fujairah, United Arab Emirates, Wednesday, June 19, 2019. Cmdr. Kido said Wednesday that damage done last week to the Kokaku Courageous was “not consistent with an external flying object hitting the ship.”
(AP)

The so-called limpet mines got the name from the real limpets, small sea snails that easily cling to hard surfaces and rocks.

The weapon was first developed by the British during World War 2 and is often used in covert action in order to damage ships because they are easily attachable.

There are certain variations, with some detonated by a time fuse while others explode only after the vessel to which the mine is attached travels a specific distance.

In most cases, the mines are magnetic and are easily attachable to the hulls of a ship. They normally just disable rather than sink a vessel.

This wouldn’t be the first time Iran used the mines to attack oil tankers. In the 1980s, the “Tanker War” erupted in the midst of the eight-year conflict between Iran and Iraq, threatening to disrupt the global oil supply.

The U.S. government has been working to provide enough credible evidence linking Iran with the oil tanker attacks. Pictures of pieces of a limpet mine were released as part of that effort by the U.S. Navy on Tuesday.

The black-and-white footage, as well as still photos released by the U.S. military’s Central Command on Friday, appeared to show the limpet mine on the Japanese-owned Kokuka Courageous, before a Revolutionary Guard patrol boat pulled alongside the ship and removed the mine, Central Command spokesman Capt. Bill Urban said.

U.S. Central Command (CENTCOM) also released additional images Monday showing the aftermath of mine attacks against the oil tankers, including some images purporting to show Iranian forces removing an unexploded device from the hull of one of the vessels.

Iranians dismissed the allegations, with Iranian Defense Minister Gen. Amir Hatami saying they were unfair and aimed at tarnishing the country’s image.

“The accusation against Iran is totally a lie and I dismiss it firmly.”

“The accusation against Iran is totally a lie and I dismiss it firmly,” he said, according to the semi-official Fars news agency on Wednesday.

While the U.S. claims of Iran’s responsibly are viewed cautiously in Europe, with Britain being a notable exception, some European countries are warning that the risk of war cannot be ruled out.

German Foreign Minister Heiko Maas said the risk of war in the Persian Gulf region is not ruled out amid the heightened tensions and said the “the situation is serious” and “everything must be done” to avoid further escalation of the tensions in the region.

Iran, meanwhile, said Wednesday that Europe won’t be granted extra time beyond the July 8 deadline to come up with improvements in the nuclear deal to protect the Iranian economy amid U.S. sanctions, Reuters reported.

The spokesman for Iran’s Atomic Energy Organization said Iran will begin enriching uranium to a higher level if Europe did improve the nuclear accord.

Over three generations, the Kim dynasty of North Korea has hijacked the ancient origin sto…

Over three generations, the Kim dynasty of North Korea has hijacked the ancient origin …

China-India border: Why tensions are rising between the neighbours – BBC News Let us …