As the coronavirus outbreak spreads globally, Italy is now the No. 2 epicenter, surpassing South Korea.

In Italy, there are 7,375 cases across the country, an increase of 1,492 from the day before, reports showed.

Tourists with masks visiting the Colosseum in Rome on Saturday. (AP Photo/Andrew Medichini)

Italy now has registered more cases of the virus than any country but China, where the disease apparently has been in retreat.

Italy took a page from China’s playbook Sunday, attempting to lock down 16 million people — more than a quarter of its population — for nearly a month to halt the relentless march of the new coronavirus across Europe.

CORONAVIRUS: EVERYTHING YOU NEED TO KNOW

Weddings and museums, movie theaters and shopping malls all were affected by the new restrictions, which focused on a swath of northern Italy but were disrupting daily life around the country. Confusion reigned after the quarantine was announced, with residents and tourists from Venice to Milan trying to figure out how and when the new measures would take effect. Travelers crammed aboard standing-room-only trains, tucking their faces into scarves and sharing sanitizing gel. 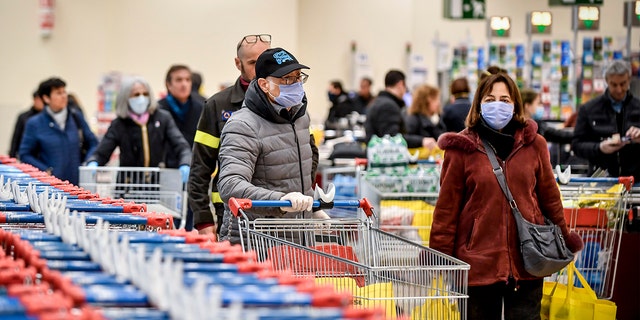 People wearing masks at a supermarket in Milan on Sunday. (Claudio Furlan/LaPresse via AP)

Tourists in the region, including those from abroad, were free to head home, Italian transport ministry officials said, noting that airports and train stations remained open.

The pope, who has been ill, held his Sunday blessing by video instead of in person, even though he was not directly affected by the lockdown. He described feeling like he was “in a cage.”

Italy has been closing all museums and archaeological sites, even those far from the lockdown zone. The northern regions affected by Sunday’s decree closed cinemas and ski slopes. 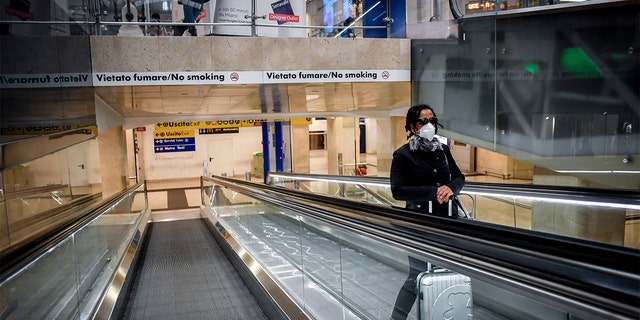 A woman wearing a mask on an escalator inside Milan’s central train station Sunday. (Claudio Furlan/LaPresse via AP)

Restaurants all around Italy were expected, somehow, to keep patrons apart from each other.

The Vatican Museums were closed, including the Sistine Chapel, in yet another blow to Italy’s all-important tourism industry. Alitalia, the Italian airline that already was ailing financially before the virus, suspended all national and international flights from Milan’s Malpensa airport starting Monday.

BRYAN, Texas (KBTX) – A Bryan woman who survived a long fight with breast …

Mr. Ramanathan has spent over 27 years with Landmark Group and has built market …