Seven of the rockets were intercepted by the Iron Dome aerial defense system, IDF spokesman Jonathan Conricus said Wednesday. Three landed in populated areas and a fourth landed close to a kindergarten, but no children were there at the time, Conricus said. There were no reports of any Israeli injuries. 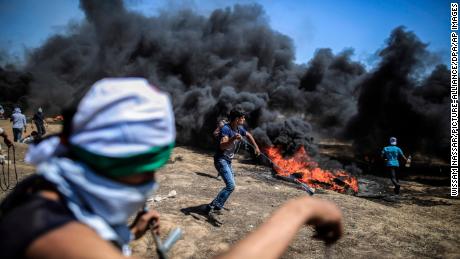 In response, Israeli fighter jets struck 25 military targets in Gaza, including four compounds belonging to Hamas, the Palestinian militant group that controls Gaza, according to the IDF.
The IDF blamed Hamas for Tuesday’s rocket launches, accusing the group in a statement of “dragging the Gaza Strip and its civilians down a continually deteriorating path,” adding that Hamas would “bear the consequences for deliberately targeting its terror at Israeli civilians.”
Hamas spokesman Hazem Qassem told CNN that the rockets were a response to previous Israeli shelling. “Israel has carried out military actions in response to peaceful demonstrations on the border and shelling of places belonging to the resistance,” Qassem said, adding that Palestinians have “a natural right” to respond to those actions. 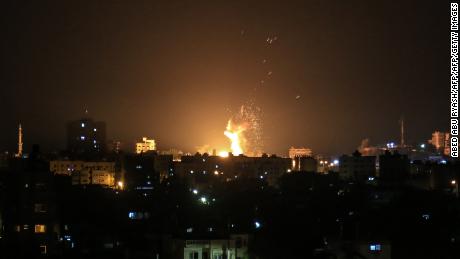 The exchange came a day after Israel struck nine targets in northern Gaza in response to the launching of incendiary kites by Palestinians, according to the IDF.
Israel has struggled to deal with the low-tech weapons, which have sparked hundreds of fires and burned more than 6,000 acres of farmland, according to a spokesman for Israel’s Foreign Affairs and Defense Committee Monday.
Firefighters in Kissufim, on the Israeli side of the Gazan border, told CNN Monday they were battling 20 to 30 blazes a day. 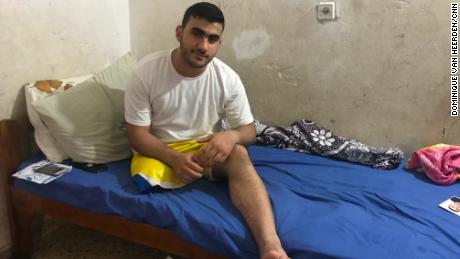 Speaking about the kites Wednesday, Conricus said: “They may look like a toy but… they are not toys, they are weapons. They are intended to kill and inflict damage.”
The use of kites by Palestinian demonstrators in Gaza has increased significantly in recent weeks. It’s part of the continuing protest movement along the border fence separating Gaza and Israel, in which more than 120 Palestinians have been killed since March 30.
Israel has been accused of using excessive force against the protesters, a charge the country’s leaders have denied. Israel claims Hamas is orchestrating the protests.
Last week, the UN General Assembly condemned Israel for the use of excessive force against Palestinian civilians. The resolution also condemned the firing of rockets from Gaza into Israeli civilian areas.