Despite the midsummer heat and humidity, large numbers of people — including families and the elderly — gathered in Victoria Park on Sunday. Many wore the signature black look that has become a common sight at the protests and chanted “Free Hong Kong!” as they thronged through the city.
The Civil Human Rights Front, which organized the march, is demanding an independent investigation into what it says was a police crackdown on protesters and the release of those who were arrested during previous street clashes. 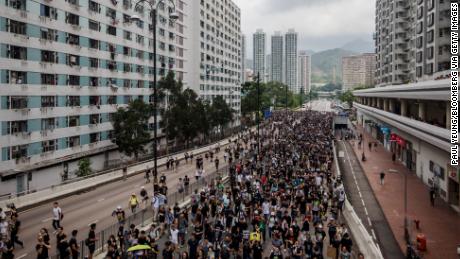 There was a heavy security presence along the proposed protest route Sunday, following a police raid Friday night on a suspected bomb-making factory. Police have arrested three men in connection with the raid, in which 2 kilograms (4.4 pounds) of high-powered explosives, including triacetone triperoxide (TATP), and various weapons were uncovered. Leaflets linked to anti-extradition bill protests were also found on site.
Mass demonstrations calling for government reforms and democracy have been a recurrent sight this summer in Hong Kong, with hundreds of thousands of people marching through the city each weekend.
The protests were sparked by strong public opposition to a bill that critics fear would allow citizens to be sent across the border into mainland China, to face trial in a system with a 99% conviction rate and a history of political prosecutions.
The ongoing demonstrations, which have often turned violent, have already forced the government to suspend the controversial legislation. On June 18, Hong Kong’s Chief Executive Carrie Lam said the bill was “dead” and there was “no such plan” to reanimate it.
For protesters, however, that is not enough. They are calling for the complete and formal withdrawal of the bill, as well as for Lam’s resignation and other democratic reforms in the city, which is ruled under a “One Country, Two Systems” arrangement with mainland China.
Sunday’s march is expected to take protesters from Victoria Park to Luard Road in the city’s Wan Chai district. Police have refused to let protesters move on to Admiralty, the location of the government headquarters, the Legislative Council — and the scene of previous clashes between police and demonstrators. Many protesters though appeared to be defying police orders and moving beyond the designated route towards Admiralty.
Sunday’s march was one of several protests held in the city over the weekend.
Earlier on Sunday, about 4,000 social workers took to the streets in a silent march calling for Lam to step down, as well as for the complete withdrawal of the extradition bill and universal suffrage.
Registered social worker Tammy Leung said protesters were determined to keep marching week after week.
“Why we keep coming out? Because the government do not handle or respond to anything on what is happening,” said Leung. “All my life, it’s the first time for me to come out continuously, over the (past few) months. And why we do that? The government never responds, never listens. So I don’t think we’ll lose the public support. They will keep support us.” 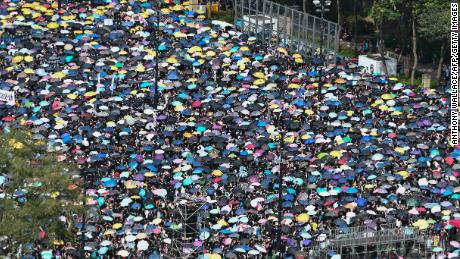 The prolonged social movement gripping Hong Kong has not been limited to anti-extradition bill protesters. Those who support the city’s beleaguered police force and government are also making their voices heard.
On Saturday, thousands of demonstrators gathered in support of the government and police at a scheduled rally in Tamar Park, in the city center, to “safeguard Hong Kong” from the so-called “violence” of anti-extradition protesters.
The city’s police force has come under increased scrutiny in recent weeks following a series of violent clashes between police riot units and mostly young protesters. Many in the city have have accused the police of using excessive force, which some see as unnecessarily brutal.
Kay Chan, 39, a media worker said: “Not every Hong Kong people is against the police force. Still a lot of us support them and a lot of us support our government. And also I support Chinese government. And so I, I want to show my support so I come to the event today.”
One of the goals of Saturday’s pro-Beijing march was to voice support for the force, organizers said.
“Who gives us the rule of law in Hong Kong? Who gives us its confidence? It’s the Hong Kong police. They are doing a very good job,” David Lan, of the Friends of Hong Kong Association, said Friday, after handing over a large donation to the police welfare fund.

How Do Children Fight Off the Coronavirus? – The New York Times