After an anti-Semitic attack on a synagogue in Germany Wednesday left two people dead, officials are working to reassure the country’s Jewish community, which is unsettled amid rising concerns about far-right extremism and anti-Semitism.

The attack on the synagogue in the city of Halle fell on Yom Kippur, the holiest day of the Jewish calendar, during which worshippers atone for their sins. Nearly 80 people — including 10 Americans — were inside the place of worship when a “heavily armed perpetrator” opened fire.

Suspect “Stephan B.,” a 27-year-old from the state of Saxony-Anhalt, where Halle is located, allegedly fired what appeared to be homemade weapons. Prosecutors said he fatally shot a woman on the street, outside the synagogue, and a man at a nearby kebab shop.

The attack, with the gunman ranting about Jews and denying the Holocaust in English, was live-streamed on the online streaming platform Twitch. It apparently was filmed using a head-mounted camera, and showed the perpetrator driving up to the synagogue in a car packed with ammunition and apparent explosives.

The suspect, a German citizen who has been charged with two counts of murder and nine counts of attempted murder, planned the attack, Germany’s chief federal prosecutor Peter Frank said Thursday. He allegedly wanted to carry out a “massacre” in a synagogue and had roughly nine pounds of explosives in his car.

A person draped with the flag of Israel stands next to flowers and candles in front of a synagogue in Halle, Germany, on Thursday.
(AP Photo/Jens Meyer)

Frank told reporters in Karlsruhe that “what we experienced yesterday was terror.” He said that the suspect wanted to create a “worldwide effect” by livestreaming his attack, in which two people were killed outside the synagogue. He wanted to encourage others to imitate him.

Synagogues are often protected by police in Germany because of anti-Semitism and right-wing extremism, and police in two other eastern cities – Dresden and Leipzig – stepped up security at synagogues after the shooting in Halle.

Schuster said members of the congregation on Wednesday described waiting behind locked doors for the police to arrive, which took more than 10 minutes.

“I am convinced that if there had been police protection there, in all probability the assailant would not have been able to attack a second site,” he said.

Privorotzki said he watched on surveillance video as the suspect tried to break into the synagogue.

“That was a shock for us, that was Yom Kippur, all phones were switched off, we had to understand what was going on first — then switch on my phone and then call the police,” he told The Associated Press. “It was really panic but I have to say after that, when the police came, we continued with the worship service, that lasted another three hours, the synagogue worship service.” 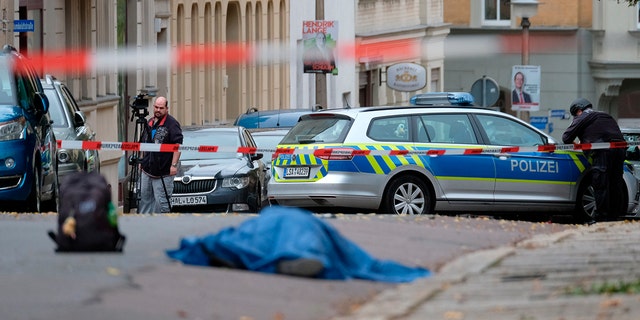 Two people were shot and killed in Halle, Germany, on Wednesday in what officials have described as an anti-Semitic attack, which targeted a synagogue.
(Sebastian Willnow/dpa via AP)

Germany’s president, Frank-Walter Steinmeier, laid flowers outside the synagogue and met with community representatives, the first of several officials who were due to visit.