While the U.S. and Europe struggle to contain an autumn surge in coronavirus infections, two small nations are bucking the trend, keeping cases under control without stringent restrictions.

In the north of Europe, Finland and Norway boast the West’s lowest rates of mortality linked to Covid-19 and a low incidence of coronavirus infections even though they have kept their economies and societies largely open while lockdowns returned to the continent.

While Sweden has captured global attention with its refusal to adopt mandatory restrictions—a policy now being reversed in the face of spiraling infections and deaths—its two northern neighbors now stand out as the closest Western equivalents to Asian nations that have managed to avoid the worst of the pandemic. 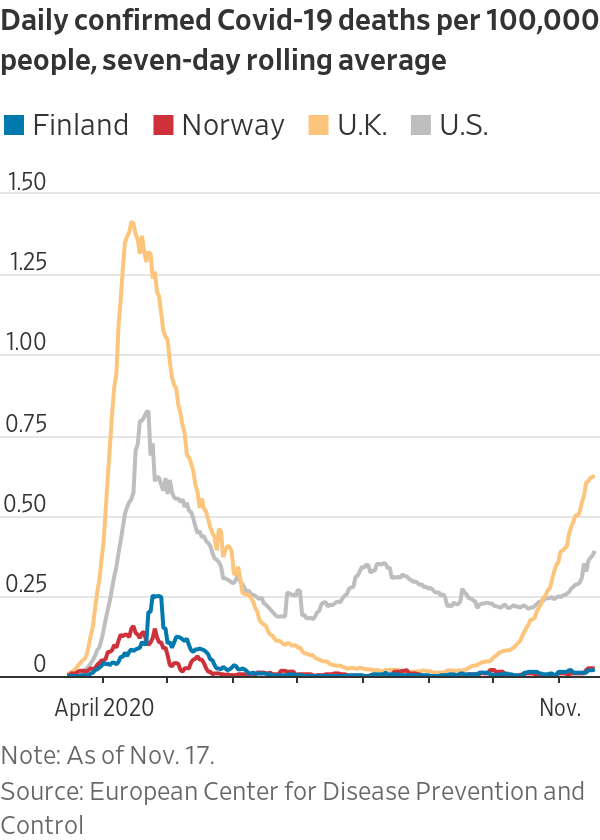 Their recipe: a brief, targeted lockdown in March, followed by tight border controls with mandatory testing and quarantine for all travelers.

Elsewhere in Europe, strict lockdowns in the spring helped bring infections down, but as most of the continent reopened borders, summer travelers turned into incubators for a new and bigger wave of infections, according to epidemiologists and policy makers. Even as governments reimpose draconian restrictions, borders across Europe remain largely open.

The Nordic policy mix could offer lessons for Western governments that are scrambling to bridge the gap until vaccines become widely available and whose latest lockdowns are causing public frustration and exacting a rising economic toll.

“Life is much closer to normal here than in most countries,” said Katja Kähkönen, a theater director from Tampere in Finland. Ms. Kähkönen’s new piece premiered on Saturday in front of a reduced audience under distancing rules that have roughly halved the number of people allowed to attend concerts and dine at restaurants.

After the show, she and her colleagues visited an Italian restaurant while a rock concert was taking place in a nearby bar—a scene now unimaginable in most European countries.

Finland and Norway follow a similar playbook of strict border controls, mandatory quarantines and detailed contact-tracing focused on preventing superspreading events when infections do occur. Travelers to Norway must produce a negative test to enter the country and must stay confined for 10 days in a certified hotel after arriving. Violators are subject to high fines or deportation.

Stopping inbound international travel early and urging Finns not to travel abroad was the foundation of Finland’s success, said Mika Salminen, director of the Department of Health Security and one of the architects of the pandemic strategy. As a consequence, air travel dropped by 95%, and over 94% of Finns vacationed within their country from May to August—with the rest traveling mainly to Norway.

“That meant we didn’t import infections like most of Europe did,” Mr. Salminen said.

Both countries also stand out for having forged a broad political consensus around their pandemic plans. The measures have changed little over time, avoiding the confusion of ever-shifting rules in the rest of Europe, and polls show they enjoy broad public support.

In Norway, government and opposition parties held a joint news conference in March to support the nation’s pandemic policy. The government has published every piece of expert advice underpinning the measures, and Prime Minister Erna Solberg holds televised news conferences for children, where she and her ministers field questions about the pandemic. Similar events took place in Finland in April. 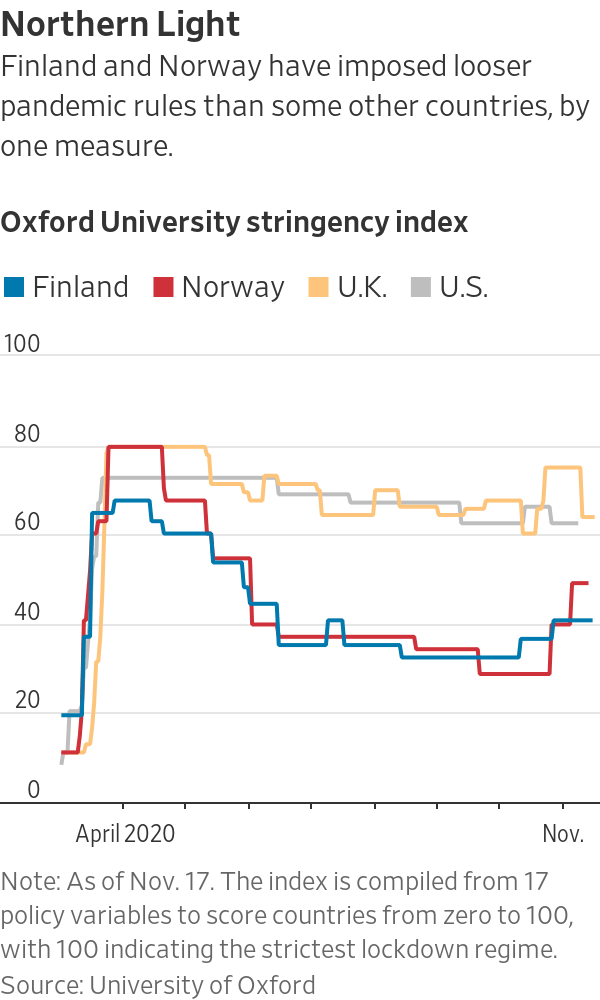 The approach has brought economic dividends. Gross domestic product in Norway and Finland is set to drop by 2.8% and 4%, respectively, in 2020 compared with falls of 12.8% in Spain and 9.8% in France and Britain, according to International Monetary Fund estimates.

On the health front, authorities in Norway and Finland are able to trace the origin of most new coronavirus cases whereas in Germany, which has fared better in the pandemic than most large European nations, the origin can’t be determined in 75% of cases. When Norwegian authorities noticed that the incidence of Covid-19 was higher among some minorities, they organized meetings with community and religious leaders to devise a common information strategy.

Norway did experience a jump in new cases this month, which authorities blamed largely on foreign workers who had avoided quarantine by exploiting a legal loophole that has since been closed.

To be sure, both nations benefit from their low population density, a sophisticated digital infrastructure, world-class health care systems and relatively high levels of public trust in government. Nearly half of Finland’s 5.5 million inhabitants use the government’s coronavirus contract-tracing app—among the highest rates in Europe—and compliance with the rules exceeds 80%, said Vivikka Richt, spokeswoman for the health care ministry. 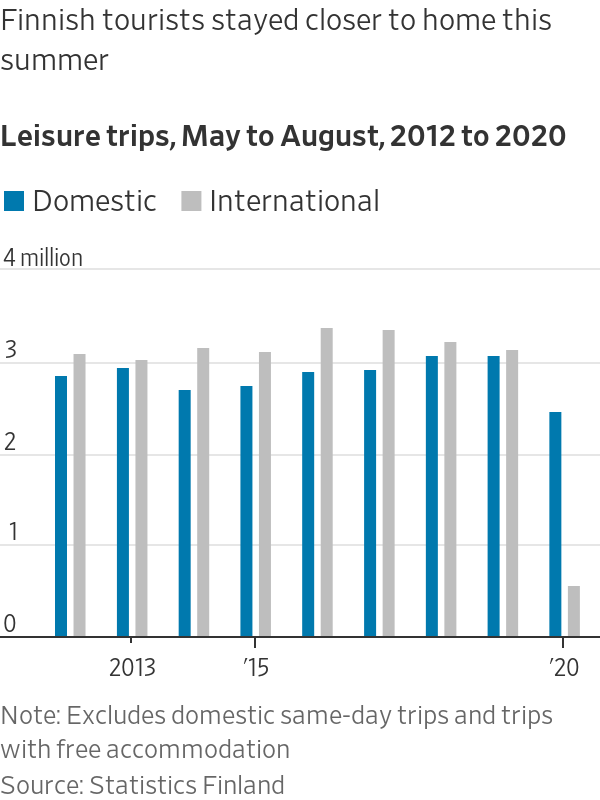 “When the government makes rules to protect us from a pandemic, we don’t go out to streets to protest against them like [people did in] other countries,” Ms. Richt said in reference to protests across the U.S. and Europe.

Such trust was key to Norway’s ability to contain contagion without imposing draconian measures, said Bent Høie, the country’s health care minister. Early on, Mr. Høie invoked the Old Norse tradition of dugnad—unpaid communal work carried out in solidarity with neighbors—as a recipe for beating the pandemic.

“It’s very important for people to trust not only the government, but also each other: they know that when they follow the rules, their neighbor will do the same,” Mr. Høie said.

Nordic culture played a more subtle role, too, in keeping the virus at bay. Officials from both countries said the fact that families rarely live together across generations and that social distance is broadly accepted reduced opportunities for the virus to cross into vulnerable groups.

“Finns are friendly but maybe a bit reserved in terms of physical contact; our comfort space is perhaps larger than that of Italians,” Mr. Salminen said.

Health experts say having a vaccine is just one front in a two-front battle against Covid-19. The other is effective treatments for those who are already sick with the disease. WSJ breaks down the three most promising types in development. Photo Illustration: Jacob Reynolds/WSJ.

Both countries also used the summer to prepare for a winter surge in infections. Finnish universities, in cooperation with authorities, trained thousands of people online to conduct contact tracing while Norway boosted its testing capacity to be able to test 5% of its population each week.

Norway, like Finland, has a decentralized system where municipalities enjoy some latitude in shaping pandemic rules. Oslo, the capital, banned all bars and restaurants from serving alcohol this week after data showed the virus was spreading faster among young adults when they consumed alcohol.

Companies have adapted too. At the Helsinki-based OP Financial Group, around 9,000 of the more than 12,000 employees worked from home in the spring. Now that figure has dropped to 7,000, but only 30% of the staff can be present at the office simultaneously, said Hannakaisa Länsisalmi, the company’s chief human resources officer.

Ms. Länsisalmi said she had been able to pursue her hobby—classical ballet—but during dance classes she is required to wear a mask and her group has been reduced to five participants. She is now looking forward to a coming performance of the Nutcracker at the Finnish National Opera.

“It is the right show ahead of Christmas, and of course everyone will be wearing masks. Our mantra is better safe than sorry,” Ms. Länsisalmi said.