Judge Hassan Farid, center, issued a verdict against defendants in Cairo on Saturday.

CAIRO—An Egyptian court on Saturday sentenced 75 people to death for their involvement in pro-Muslim Brotherhood protests five years ago, in a mass trial of more than 700 defendants that rights groups criticized as unjust.

Most of the accused were arrested during the security forces’ assault on a sit-in at the Rabaa al-Adawiya square in Cairo that killed hundreds of people. The protests were in support of President Mohammed Morsi after the Islamist movement’s leader was ousted by the army.

Charges against those sentenced to death included the murder of citizens and policemen, terrorizing people and possessing weapons. Others, including an award-winner photojournalist, were given prison terms of varying lengths including life terms by the Cairo Criminal Court. The court sentenced Mr. Morsi’s son, Osama, to ten years.

Judge Hassan Farid announced the verdict in a crowded courtroom in Cairo’s Tora Prison where the inmates appeared behind a metal cage. The defendants can challenge the verdict in a higher court and ask for a retrial.

“The fact that not a single police officer has been brought to account for the killing of at least 900 people in the…protests shows what a mockery of justice this trial was,” Najia Bounaim, North Africa Campaigns Director at Amnesty International, said in a statement. “The death penalty should never be an option under any circumstances.”

She noted that in the Rabaa al-Adawiya trial, the group of 739 protesters were collectively prosecuted for the killing of 17 men, including seven members of the police force, as well as other charges that included illegal gathering, incitement to break the law and involvement in violence.

Mr. Sisi’s government said that protesters in the squares were armed and shot at security forces that were trying to disperse them.

Saturday’s verdict was postponed twice this summer due to security concerns. The mass trial, one of several targeting the Muslim Brotherhood after the 2013 coup, attracted global attention as Egyptian authorities continue to crack down on civil society, including politicians and journalists. Mr. Morsi is imprisoned on separate charges. The Muslim Brotherhood is now banned.

Other mass trials for the group’s members and supporters have been held. Among the largest of these trials, a Minya court issued death penalty verdicts for 683 defendants in 2014 for charges of murder and violence.

Courts in Egypt are independent but have been criticized sometimes by activists of siding with the government since the 2013 coup. 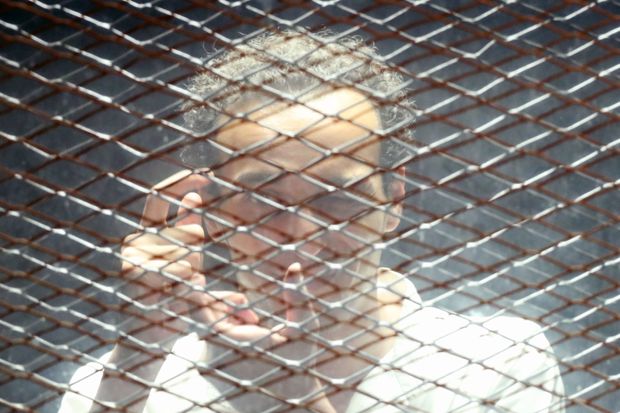 Among those sentenced was award-winning photojournalist Mahmoud Abu Zeid, widely known as Shawkan. Mr. Abu Zeid was arrested while documenting the violence in Rabaa al-Adawiya square. The court sentenced him to five years in prison.

Mr. Abu Zeid’s lawyer Karim Abdel Rady expects him to be released within a couple of days as he has already spent the last five years in pretrial detention, during which he received a press freedom prize from Unesco in April 2018.

Mr. Abu Zeid smiled and waved to journalists after the judge pronounced the verdict and the courtroom cheered.

“We still think the verdict is unfair because Mahmoud didn’t commit any crimes. He was only doing his job as a journalist,” Mr. Abdel Rady said after the verdict, adding that he will appeal the court decision.

Mr. Abu Zeid’s brother, Mohamed, waited outside the Tora complex after security forces denied him and other defendants’ families entry into the courtroom. Mohamed said the family was hoping for an acquittal verdict yet is happy he would not have to spend additional prison time. “The house has been very depressing without him,” he said.

A deadly outbreak is growing. Here’s what you need to know. China restricts travel f…

A deadly outbreak is growing. Here’s what you need to know. China restricts travel …