Anti-government protesters in Ecuador‘s capital showed off captive police officers on Thursday, more than a week after the country plunged into deadly unrest over fuel price hikes and other austerity measures.

The officers were shown at a cultural center in Quito, where indigenous protesters are based. One officer was forced to drape the Ecuadorian flag over his shoulders and don a hat worn by some indigenous people. A female officer could be seen wiping tears from her face.

They were all forced to remove their boots in front of hundreds of demonstrators and were checked by medical officials.

“With the blood of our brothers, we won’t negotiate,” indigenous leader Jaime Vargas said during a speech to the crowd.

A policeman detained by anti-government protesters is made to hold an indigenous banner while standing on a stage in Quito, Ecuador, on Thursday. (AP Photo/Dolores Ochoa)

The government has offered agricultural aid and other incentives for indigenous groups in hopes of ending the crisis. In response, Vargas accused lawmakers of deceiving and neglecting the country’s poor.

The nation is in upheaval, with rioting, looting, vandalism and clashes with authorities that have left five dead, including an indigenous leader. President Lenín Moreno’s office disputes that number, saying two people have died.

In other acts of unrest, demonstrators have blocked highways and parts of the nation’s oil industry have been suspended.

On Monday, crowds broke into the comptroller general’s office and vandalized the National Assembly building. Some lawmakers described it as “an attempt to take over parliament.”

Protesters have demanded an end to the removal of fuel subsidies, which were among the measures included in a $4.2 billion package with the International Monetary Fund.

Indigenous groups oppose the plan, saying it will deepen economic inequality. The IMF said it will generate jobs. Moreno said the fuel subsidies have cost the country heavily in recent years and he axed them to stimulate the economy. 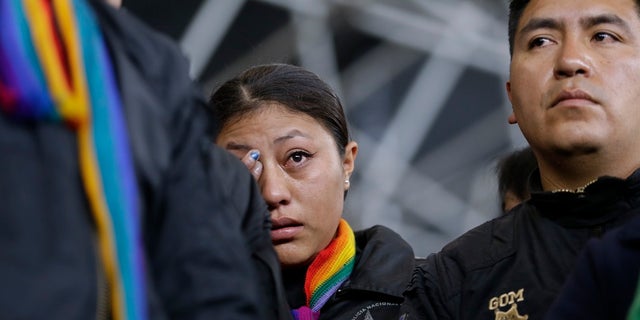 A policewoman, who was detained by anti-government protesters, cries while standing on a stage at the Casa de Cultura in Quito. (AP Photo/Fernando Vergara)

Ending the subsidies more than doubled the price of diesel and raised gasoline prices overnight.

Economic problems in Ecuador stem from the high public indebtedness Moreno inherited from the 2007-17 administration of left-wing President Rafael Correa.

Fox News reporter Greg Norman and The Associated Press contributed to this report.