A fire that swept through a factory where laborers were sleeping on Sunday morning, killing at least 43 people. Relatives of the victims gathered outside a hospital mortuary in the city on Sunday.

A fire broke out at a factory in India’s capital New Delhi early on Sunday morning. At least 43 people have been reported dead.

Many of the victims were asleep in beds in the factory, resting between shifts, when the fire began.

Investigators say the blaze was sparked by an electrical short circuit. Most of the deaths were caused by people inhaling poisonous gases in the cramped factory, The Associated Press reports.

One man who lives in the area, Mohammed Naushad, told the AP that he had awoken to see the flames shooting from a fourth-floor window of the building. He went into the building, and on the third floor he saw 20 or 25 people lying on the floor.

“I don’t know if they were dead or unconscious, but they were not moving,” Naushad said. He carried out at least 10 people on his shoulders.

The fire broke out in a crowded quarter known for large wholesale markets.

Most of the victims were Muslim migrant workers who came from the Eastern state of Bihar, the AP reports, earning as little as $2.10 a day making a variety of garments. The BBC reports that about 100 people were sleeping in the factory when the fire broke out.

The area is so narrow that firetrucks couldn’t reach the factory, and had to shoot water from 100 yards away. 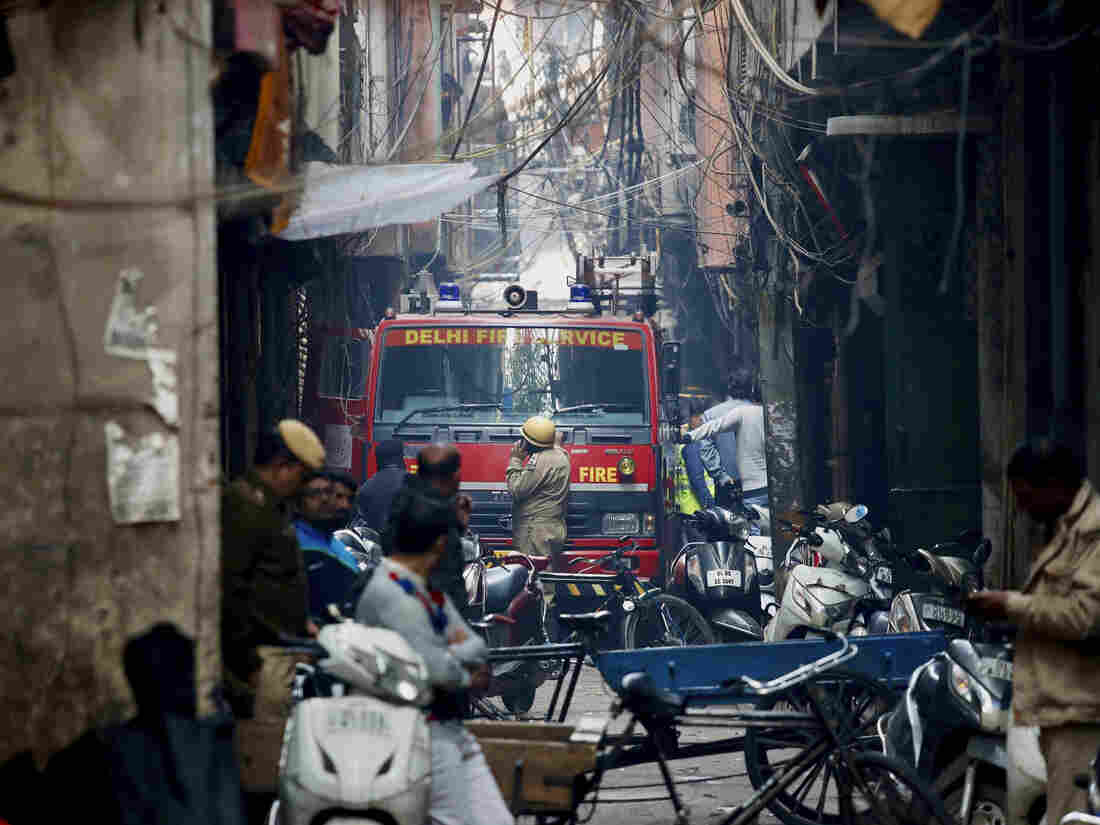 A fire engine stands by the site of the fire in an alleyway, tangled in electrical wire and too narrow for vehicles to access.

Indian Prime Minister Narendra Modi called the fire “extremely horrific” and said his thoughts were with those who lost loved ones or were injured. His office promised financial assistance from the national relief fund to those seriously injured in the fire, and the families of those who died.

Deadly fires are a regular occurrence in India, as zoning laws and safety regulations are often ignored. A local fire chief told the BBC that the building was operating illegally as a factory and lacked a fire license.

Local residents told the AP the building was full of raw plastic material.

Babar Ali, 32, rescued his sister-in-law from the fire. He told the AP that the lives of migrant workers was “a bigger tragedy than their death,” as they struggle to earn a living while working long shifts in unsafe conditions.

“Their only fault was they were poor,” Ali said. “Why else would someone work and sleep in such a congested place?”