Evidence is growing that EMFs and electrosmog may be linked to an increased risk of various health issues, including depression, sleep disturbances and decreased fertility. The World Health Organization has even classified electromagnetic fields as possibly carcinogenic to humans.

Various companies are now developing products designed to counteract the potentially negative health effects of EMFs. One of these companies is Somavedic, which has created a device they claim eliminates the negative influences EMFs can have on your health.

Somavedic offered me a free device to try out and potentially review. The device sounded interesting. I was curious to find out if it would live up to its claims, so I accepted a device and installed it in my home for a month. What follows are my personal experiences and some details about the devices.

HOW DOES A SOMAVEDIC DEVICE WORK?

I’m a healthy skeptic when it comes to products that make somewhat vague claims like they “eliminate the negative influences of EMFs”. But after taking a closer look, I found that Somavedic’s devices have a sound scientific basis.

Bioresonance therapy has been used for decades, especially in Europe, to promote general health or assist with healing. Current research backs it up, which has shown that exposure to specific, extremely low electromagnetic frequencies can trigger specific biological responses in your body. Certain European countries have even approved bioresonance machines as official medical devices.

Somavedic had their devices tested by a few different outside agencies to determine what, if any, effect they have on human biology. One test found that a Somavedic device improved heart rate variability (HRV) in 80 percent of test subjects. Your HRV is controlled by your autonomic nervous system, and a coherent HRV is typically a sign of good overall health.

Another test found that a Somavedic device had an energizing effect on volunteers as their muscle activity, skin conductance, heart rate and thorax expansion increased when they were exposed to the device. Even when researchers tested to rule out the placebo effect, the increased readings still held.

Somavedic’s devices were also shown to have a positive effect on red blood cells. Blood samples were taken from five breast cancer survivors who were in their third or fourth year following treatment. Their blood was analyzed before and after being exposed to a Somavedic device for 90 minutes. All volunteers had improved sedimentation of their red blood cells, which is a sign of healthy blood.

So, it appears Somavedic’s devices have a biological effect. The next step was to see how our new device affected my family.

MY MONTH WITH A SOMAVEDIC DEVICE

Somavedic recommends putting a device in the middle of your home for best effect, which we did. Also, two models of Somavedic’s devices are designed to structure water, including the one they sent me. Structured water is a complex subject that I’ll describe a bit more below, but Somavedic told me that placing a jug of water next to the device would improve the water’s structure in about 20-30 minutes. We tried this out as well.

The following are some key areas we noticed during our trial month.

Coincidentally, our first month with the Somavedic device was a fairly stressful one. Our son sprained his ankle, both my husband and son got a nasty head cold that lasted for a couple weeks, and I took on some extra work and was putting more hours into my business.

Despite all the craziness, when I reflected back on my first month with a Somavedic device in the house, I realized my stress reactions hadn’t been as strong as in the past, and I didn’t feel as overwhelmed or anxious. I was actually feeling quite positive about life. And I was finding ways to get everything done, even around sickness and longer work hours.

My husband also noticed that we seem to be arguing less, and he’s felt calmer than usual. It’s possible we’re only experiencing a placebo effect. But, as I write this, we’ve had the device for 6 weeks. I doubt a placebo effect of reduced stress and increased calmness would hold out that long in the face of what we’ve been through these past 6 weeks.

This was another area we found a change in. Within a couple days, my husband noticed he could focus better during meditation and his meditations felt deeper. I didn’t notice anything right away, but now I’m also finding it easier to concentrate on tasks and work, as well as meditation.

Previously, meditation often felt like a chore to me, so I had a hard time doing it consistently. But recently, I’m not as restless during meditation and I can concentrate better. I’m actually starting to enjoy meditation and I’m doing it more regularly. Considering the health benefits of meditation, I think this is a very positive change.

Somavedic claims their devices can also help with issues such as sleep problems, headaches, tiredness and immune function. My family had no obvious results in any of these areas. I still had a couple headaches during the month. Our son has never been a good sleeper, and he hasn’t noticeably improved with the Somavedic device around. And none of us feel less tired or like we have more energy, but to be fair, it was an especially tiring month.

On their site, Somavedic points out that the effects of their devices are typically very gentle and gradual, so people may see more results over a longer period. They suggest trying a device for at least a year to allow time for your body to adjust and experience the full possible benefits. 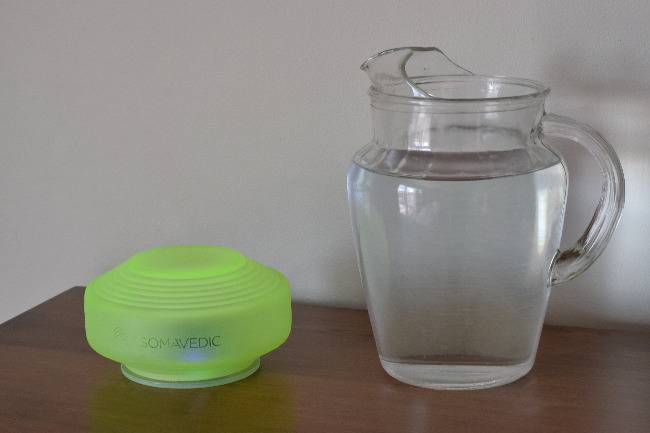 Our Somavedic device and water jug

The device Somavedic sent me is supposedly able to structure water. Structured water is an emerging theory that suggests water, which has not been processed or contaminated in any way, has a distinct structure and electrical charge. It’s suggested that water with this molecular structure is found in our body’s cells and is better for our health than processed water.

Dr. Gerald Pollack, a professor of bioengineering at the University of Washington, has made some fascinating discoveries about the properties and structure of water. If you’re curious to learn more about this topic, check out Dr. Pollack’s TEDx talk here.

To find out if there was anything to this theory, we started putting a jug of water next to our Somavedic device for at least 30 minutes. The first time we tried the water, my husband and I noticed a distinct difference in the taste. We usually drink local well water, which is untreated, but naturally quite hard. Comparatively, our water that spent time next to the Somavedic device tasted more like softer, spring water.

Our two-year-old even seemed to notice a difference. The first time I gave him a glass of the Somavedic water he announced, “Good water. Refill!” It was such a strange thing to say, I asked him what he just said. He looked at me innocently, held out his glass, and repeated, “Refill!” Clearly, he liked the structured water. 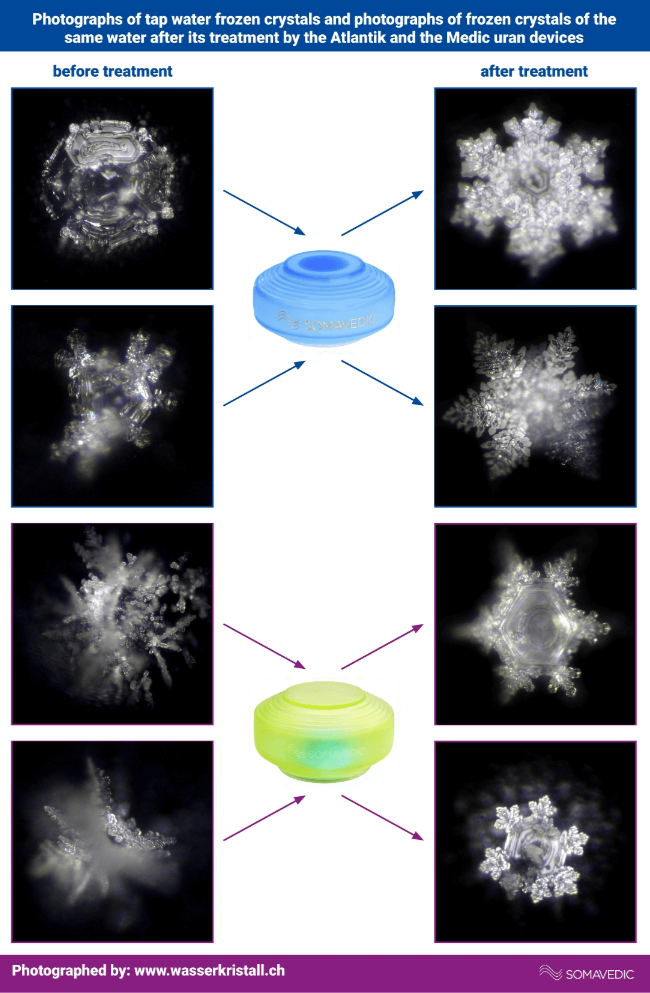 WOULD I RECOMMEND THIS PRODUCT?

Yes, based on my personal experience, I’d recommend getting a Somavedic device. For my family, the effects have been quite subtle. But even these small changes have had a positive impact on our lives.

The reduction of stress, anxiety and conflict in our home has been the most significant change. Considering the serious health consequences of chronic stress, reducing stress levels over the long-term could be life-changing for many people, both physically and mentally. For us, we already have a more peaceful home after only a month with a Somavedic device.

We’ve also appreciated our increased focus and concentration, as well as the structured water. It’s hard to know if the water is actually benefiting our bodies, but it certainly tastes better and is more pleasant to drink.

Our Somavedic device has affected all of us in some way. We’ll keep it installed and watch for any longer-term benefits. If you’d like to find out more about Somavedic’s devices and if they might be right for you, check out their website. It has more details on their different models, research, prices and an online chat for any questions.