Marijuana vape pens are safe from bans on flavored e-cigarettes recently announced by Michigan Governor Gretchen Whitmer and subsequently President Donald Trump — but they are facing their own set of issues.

Whitmer and Trump are trying to address a growing health epidemic of young people vaping by banning the sales of flavored nicotine e-cigarette products.

But another health emergency is emerging — and it involves marijuana vape products.

The U.S. Centers for Disease Control and Prevention are investigating 380 cases of lung illness reported in 36 states and one U.S. territory linked to vaping. Six deaths have also been reported. Most of those patients reported using a THC vape, though many of them have used both THC and nicotine vapes, according to the CDC.

In Michigan, six cases of respiratory illness related to vaping are under investigation by the state health department. Some of those cases involve individuals that have used THC vaping products, according to Bob Wheaton, spokesman for the Michigan Department of Health and Human Services.

The Michigan Poison Center at Wayne State University has received reports of 11 people experiencing negative effects from marijuana vapes so far this year, according to data provided by medical director Dr. Cynthia Aaron. Six of those cases were in patients under the age of 18.

The Marijuana Regulatory Agency has not issued any warnings or recalls in association with state or national investigations into respiratory illness from marijuana vape products.

“Consumer safety is always of primary concern to the MRA,” the Marijuana Regulatory Agency said in a statement. “We are monitoring the issue and communicating with public health officials as they investigate the concerns.” 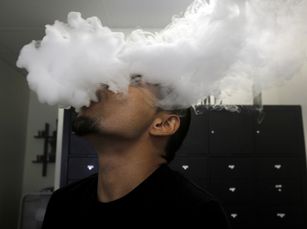 Six cases have been diagnosed all within 60 days.

The CDC has not yet identified the cause of the illnesses.

“Our laboratory is working closely with our federal and state partners to identify the products or substances that may be causing the illnesses and have received more than 120 samples from the states so far. The FDA is analyzing these for a broad range of chemicals but no one substance, including Vitamin E acetate, has been identified in all of the samples tested,” said Acting FDA Commissioner Dr. Ned Sharpless in a statement. “Importantly, identifying any compounds present in the samples will be one piece of the puzzle but won’t necessarily answer questions about causality, which makes our ongoing work critical.”

Initial reports indicated thickeners like Vitamin E acetate were found in cannabis products collected from patients who had fallen ill, according to media reports.

Thickening products are added to cannabis oil by companies trying to get the most bang for their buck out of THC vape liquid, a practice that typically occurs on the black market, said William McClean, CEO of Wildflower Brands — a Canadian-based CBD vape company that sells its products across the U.S.

“People are getting sick because they’re getting their product from the illicit market,” McClean said.

This week New York Gov. Andrew Cuomo directed the state’s health department to subpoena three companies that have been selling Vitamin E thickeners — which include an Ypsilanti business, Floraplex Terpenes, according to media reports.

This week a Michigan medical marijuana company called on state officials to ban the use of non-natural additives and cutting agents in vape cartridges.

It’s not just vaping liquid that is being scrutinized. The hardware can be problematic. Heating coils in vape pens may be leaking lead and heavy metals into the liquid.

In April Michigan regulators warned of possible lead contamination from certain marijuana vaping products due to possible components in the pens that may leach lead into the vape liquid. The warning came came after a batch of medical marijuana vape cartridges in Michigan tested positive for lead — and prompted regulators to change their testing requirements.

McClean said many vaping products are made with cheap materials that aren’t medical-grade or food-safe, and don’t include adequate temperature controls. Some brands add chemicals to increase the cloud of vapor from the device.

“Companies are putting other things in there to make the cloud whiter and bigger — and when you’re vaping cannabis oil, it’s light grey. It’s not as visible,” McClean said.

In a study published in Environmental Health Perspectives in February 2018, the Johns Hopkins Bloomberg School of Public Health found the heating coils in e-cigarettes were leaking lead and other heavy metals into the vaping liquid — which then made its way into the aerosol that the user inhaled. In addition to lead, researchers found potentially unsafe levels of chromium, manganese and nickel. Inhaling those metals over time has been connected to lung, liver, immune, cardiovascular and brain damage, and some cancers, according to the study.

“What’s happening right now — it’s scary,” McClean said. “It shows why you need to have these regulations.”

In Michigan, the filled marijuana vape cartridge must be tested first before being sold at a medical provisioning center. The cartridges are tested for their potency, heavy metals, chemicals like pesticides, and for residual solvents from the extraction process like butane and propane.

However, there’s no testing required of the vape liquid after it’s been heated. McClean said that’s not a standard practice nationally — but should be considered as the industry moves forward.

— Amy Biolchini is the marijuana beat reporter for MLive. Contact her with questions, tips or comments at abiolch1@mlive.com. Read more from MLive about medical and recreational marijuana.

SÃO PAULO/RIO DE JANEIRO (Reuters) – In mid-March, Brazil took what seemed to be …