The 34-year-old man, who was not identified, experienced a series of intense headaches and dry heaving after eating a Carolina Reaper, reportedly the hottest pepper in the world, during the contest in New York.
The man developed excruciating pain in his head and neck, prompting him to go to an emergency room, according to an article published Monday in the journal BMJ Case Reports. “The patient ate the pepper and immediately starting having a severe headache that started in the back of the head and spread all over within two seconds,” said Dr. Kulothungan Gunasekaran, an internal medicine physician at Henry Ford Hospital in Detroit and a lead author of the report, who was not involved in the patient’s care.
“Because he could not tolerate the headache, they sent him to the ER,” he added.
When the patient arrived at the hospital, physicians were not positive what had caused his symptoms. The man did not have any neurological deficits such as slurred speech, muscle weakness or vision loss that would have indicated a stroke. CT imaging also ruled out a blood clot or bleeding in one of the large blood vessels supplying the brain.
But a CT angiogram of the brain’s blood vessels did reveal something unusual: a substantial narrowing of the left internal carotid artery and four other blood vessels supplying the brain.
“Then CT angiography was done, which showed narrowing of the blood vessels in the brain,” Gunasekaran said. “You could see the beaded appearance [of the arteries], and the yellow arrows point to the narrowing of the blood vessels.” 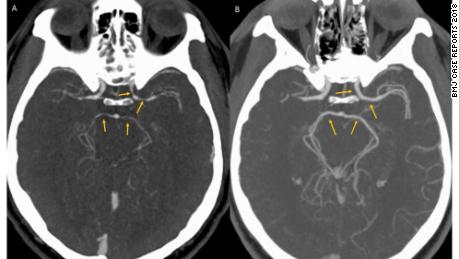 Gunasekaran and Dr. Gregory Cummings, the neurologist on the case, eventually diagnosed the man with reversible cerebral vasoconstriction syndrome, or RCVS, probably caused by the hot peppers.
RCVS is typically characterized by an intense “thunderclap” headache due to constriction of blood vessels in the brain and usually resolves within a few days or weeks, according to Dr. Anne Ducros, professor of neurology and head of the migraine and headache unit at the University of Montpellier, who was not involved in the report.
It is normally associated with certain medications, such as ergotamine or triptans, and illicit drugs, such as cocaine and amphetamines — not peppers. Severe cases can even be life-threatening, according to Ducros.
“A proportion of patients will have a severe form with strokes, and they can get either an intracranial hemorrhage of an ischemic stroke,” Ducros said. “But the mortality is low, around 2% … and most patients who die from RCVS are young women and often in the postpartum state.
“But most of them will do well with only recurrent headaches, and then they have a total recovery,” she added. 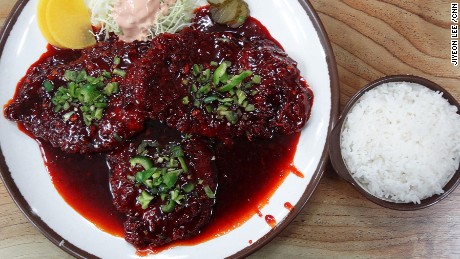 Hot peppers have a high concentration of capsaicin, a chemical responsible for the spiciness of certain foods. The substance is known to cause constriction of blood vessels in some parts of the body and is even used at low concentrations in some topical medications.
A 2012 study documented a 25-year-old man who had a heart attack and coronary vasospasms after taking cayenne pepper pills — which also contain large amounts of capsaicin — for weight loss.
But this would be the first documented case of hot peppers causing vasoconstriction in the brain, according to the report.
“This is the first time that pepper has been related to RCVS,” Gunasekaran said. “Capsaicin, the key ingredient in the pepper, is a vasoactive substance, so it could potentially narrow the blood vessels to the most important organs like the heart and brain.”
The Carolina Reaper was bred in 2013 by Ed Currie of the Puckerbutt Pepper Company. The pepper measures roughly 1.5 million on the Scoville Heat Scale — a measurement of the pungency, or spiciness, of chili peppers — according to the company’s website.
That is over 400 times spicier than jalapeño peppers, which average 3,500 to 8,000 on the Scoville scale, according to a 2013 study.
Greg Foster of Irvine, California, holds the Guiness World Record for Carolina Reaper eating. He achieved this accomplishment by consuming 120 grams of the pepper in 60 seconds at the Arizona Hot Sauce Expo in November 2016. 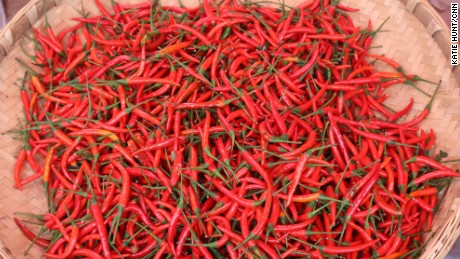 According to Ducros, RCVS can also be triggered by extreme emotions or pain, which may have played a role in the case of the hot pepper contestant.
“You can also have RCVS after strong emotion, such as learning the death of a friend,” Ducros said. “The mechanism is that strong emotion canactivate the sympathetic tone, and this leads to vasoconstriction.”
Sympathetic tone refers to the activation of the sympathetic nervous system, which also results in the constriction of blood vessels.
“For example, in the case of ingestion of pepper, perhaps it is the intense pain triggered by the pepper which triggered the RCVS and not the pepper itself,” Ducros added.
Treatment for RCVS typically consists of removal of the offending substance and supportive care such as pain management, she said.
In this case, the patient’s symptoms improved, and he was released from the hospital after a few days.
“The patient was followed up after five weeks, and a repeat CT angiography showed resolution of the narrowing of the blood vessels,” Gunasekaran said. “Usually, RCVS resolves on its own after days to weeks.”
The authors of the report advise that RCVS should be considered for patients who experience intense headaches after eating hot peppers, cayenne pepper or any other substance containing high amounts of capsaicin.
“It’s important to think about RCVS if you get a very severe and instantaneous headache. It’s the main cause after a subarachnoid hemorrhage,” Ducros said. “But, unfortunately, this condition is still not widely known.”

MADISON, Wis. (WBAY) – One day after reporting a record amount of COVID-19 related …