She was turning blue. Literally.
Drs. Otis Warren and Benjamin Blackwood wrote about the case in a study published in the New England Journal of Medicine on Thursday. Their patient, they wrote, looked “cyanotic,” the clinical term for appearing blue.
Warren, an emergency medicine physician at Miriam Hospital in Providence, said he’d only ever seen one other “blue” patient while completing his residency. It stuck with him, so he was immediately able to identify the woman’s condition.
“It’s one of those rare cases that we’re taught about, you study for, you take tests on, but you rarely ever see,” he told CNN.

Her condition kept blood from tissue 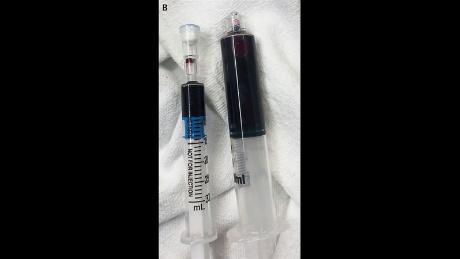 Warren diagnosed her with “acquired methemoglobinemia,” a reaction caused by certain medicines that stops blood from carrying oxygen to tissue, he said.
Oxygen-rich blood is typically associated with a bright-red color. But even though blood appears blue in patients with methemoglobinemia, oxygen levels are actually quite high, Warren said.
Blood “selfishly binds” with oxygen and doesn’t release it to the tissue where it’s needed. And thus, the patient appears blue.
It’s fitting that the antidote is a brilliant blue, too. Methylene blue returns a missing electron to the hemoglobin molecule that restores oxygen levels and helps release oxygen back into tissue, he said.
“In my field, emergency medicine, when you can cure a patient with a single antidote–that’s a rare thing for us,” he said.

In his patient’s case, her reaction was caused by benzocaine, an active ingredient found in over-the-counter toothache and cold sore medicine. And while hers is a rare side effect, it warranted a warning from the Food and Drug Administration, which cautioned against its use in children under 2, who sometimes take the medicine to soothe teething pain.
Warren’s patient recovered after two doses of methylene blue and an overnight stay at the hospital. But when levels of the mutated blood rise 50% or higher, patients can enter a coma or develop heart and brain complications from the lack of blood to tissue. Any amount over 60% can cause death, he said.

'They died in the exact same way' – CNN